“Tell me how you and Grammie ended up in mission work,” I asked as I strolled next to her.


“It was at a mission house in New Plymouth,” she replied. “Bea and I were put together to do door-to-door evangelistic work. She was quite homesick at first, so I brought her home with me at weekends. My mother treated her like a daughter, and we became best friends.” Her voice broke slightly, and she gazed upward. “It may sound silly, but I miss her terribly. We hadn’t seen each other in decades, but we wrote each other every month. And when e-mail came out, we kept in touch even more often.” She stopped walking and looked me in the eye. “She was an amazing woman, Grace ... and I can see the same strength of character in you.”

“Really?” I was still trying to make sense of her words when we reached the edge of a low cliff. 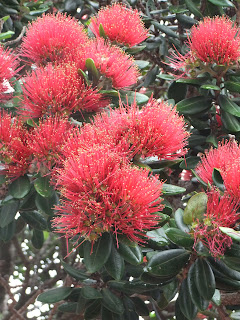 “Be careful down here,” she instructed. “The sand is loose, and it’s easy to slip.”

I was more interested in the trees with gnarled limbs and weathered trunks that clung to the rocks. Each was crowned with a mass of red blossoms that looked like the ones in my photo. “What are those?” I asked as we clambered down the path.

“Pohutakawa trees,” she answered. “They’re also known as the New Zealand Christmas tree as they flower in December.

“They’re beautiful,” I said, gazing up through the canopy of red.

“We’ll stop here for a moment,” Ngiare said. “This is one of my favourite prayer spots.” She patted a smooth gray rock and indicated I should sit next to her. The beach was about a dozen feet below us and the sand lay flat, its wrinkles and flaws smoothed by the outgoing tide.

“I can see why,” I said, taking in the floral beauty, the sparkling waters below. “It’s so peaceful here.”

“It is today, but it’s not always like that,” Ngaire said, her expression contemplative. “We have violent storms from time to time and the wind can be very damaging.” She seemed to withdraw into her thoughts for a while, and I sat and waited. The sun cast a peachy glow across the ocean, and I felt more at peace than I had for a long while.

“Did Bea ever tell you about the whales?” she asked after a while, angling her head toward me.

A surge of excitement made me sit upright. “No, but she placed a carved whale in the envelope with my tickets to New Zealand.”

“She was staying with me one weekend when a pod beached themselves over there.”

I followed the direction of her outstretched hand to an expanse of sand. “What happened?” I asked.

“We tried to rescue them. Called in an emergency and the local radio put out an appeal for people to come and help.”

“Come,” Ngaire stood and started the descent to the beach. “They were pilot whales, a pod of about thirty and they were stranded just here.”

I stood still, wind whipping my hair, salty spray coating my face as I tried to imagine the scene.

“We had a hundred volunteers come out,” Ngaire continued the story. “We stayed down here all night, draping the whales with wet towels, pouring sea water over them and turning them so they could breathe more easily.” Her eyes misted over, and I felt my own eyes moisten.

“Did you save them?”

“Some. When the tide came in, we managed to refloat those closest to the water but some of them came back. The thing is that they’re social creatures. If one of them becomes stranded due to illness or injury, the others will follow. They stick together, so to speak. They won’t leave a wounded family member – and one of the whales was obviously sick.”

I closed my eyes and for a moment I had a vision of a beach full of whales, gray skin glistening as people worked to save them. If an animal cares for its own, who am I not to? The thought skittered through my mind, and I pushed it away. People are different, I told myself.

Ngaire reached out and took my hand. “Don’t fight God, child. If He’s talking then let Him talk. And when He’s done talking, act on what He’s told you.”

“I need a few moments,” I said, loosening my hand from hers and walking toward the water. I knew that coming to New Zealand would be challenging, but Grammie had got right under my skin this time. As an animal lover I knew if whales were stranded on the beach, I’d be down here helping them ... and yet I had no time for my own sister who was obviously hurting. She had to be. “My heart has become very hard,” I whispered to God although, since it was the first time I’d talked to Him in years, I wasn’t sure He’d be listening. “If you want me to change, You’ll have to soften it for me.” I stayed on the water’s edge allowing the waves to lap at my feet as the sea changed from apricot to gold to silver.

Eventually Ngaire came to join me, her hand soft on my arm. “Come up to the Pohutakawas, Grace. There’s something there for you.

I followed her and after examining the trees in the area she pointed out, I found a carved Christmas bauble hanging from a low branch. The wood was inlaid with swirls of turquoise and pink shell and had a seam through the center. “Does it open?” I asked.

“Try and see,” Ngaire said with a smile.

I twisted the bauble carefully and split it into two halves. A carved wooden whale nestled inside in tissue paper. It was twin to the one in the envelope Grammie had left me. Twin whales, I thought. Sisters that would stay with each other to the point of death.

Before dinner that night, I volunteered to babysit Aroha. We sat on the carpet and stacked blocks into towers and then knocked them down before starting over again. She squealed with laughter and tossed her head. “Again, Grace,” she shouted. “Let’s do it again.” We had a great time, but she fussed as her mother supervised dinner and then Aroha’s teeth brushing. It’s an immense responsibility raising a child, I realized. And Lauren is doing this alone ...

I confided in Ngaire when the family had gone to bed. “I never thought of Lauren’s baby as being a child, a little person that can talk and laugh and have fun. I’m still angry with her, but something has started to shift inside me.” I hung my head, regret rising like a fountain. “I wish I had a photo of her. Flo in the Rocky Mountains showed me one of her and Lauren, but it was too small to see her face.

Ngaire smiled. “I can show you an up-to-date picture if you’d like – we can even print it out.

Five minutes later I sat in front of the family computer while she scrolled through her e-mails. “Here it is,” she announced triumphantly after a quick search. “Bea sent this through shortly before she died.” The child’s face filled the screen; thick dark curls, olive skin like mine and eyes that danced with life. I had seen that face before. The escape artist, Clara Grace, at the Nutcracker Ballet. I couldn’t stop tears from overflowing as Ngaire pulled me into her arms.

Grace takes delivery of a package and her life is turned upside down by nine sealed mystery envelopes from her late grandmother. Grammie’s instructions require Grace to take the journey of her lifetime, not only to far off places, but also into the deepest parts of her heart. As she follows the trail laid out for her and uncovers her family’s darkest secrets, Grace is forced to confront the loss and betrayal that has scarred her past and seek the greatest Christmas Treasure of all. 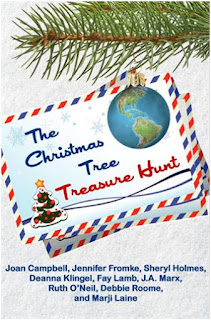 Chapter One by Joan Campbell


Learn more about this fun project at Write Integrity Press.


Joan Campbell is the Featured Author today at WIP, so drop by to read her Favorite Christmas Recipe.

You’re invited to Magnificent Hope’s Christmas Party so come over and join all the fun!