Chapter One by Joan Campbell

The flutter of little feet drew me out of deep sleep.

Light streamed through an unfamiliar window. My head pounded; my eyes ached. It didn’t feel as if it should be morning already. Where on earth …?

Of course – New Zealand! Slowly the events of the preceding day seeped back into my consciousness: the warm weather, that didn’t feel at all like Christmas, despite the baubles and tinsel decorating the airport; the strange local accents; and—worst of all—driving on the wrong side of the road to reach Ngaire’s house. As stressful as the drive had been, I had still managed to take in a little of the breath-taking scenery. The ocean had spread like a sequinned mat to the left, sparkling in the brilliant sun, while green hills had unfurled to the right. Farms had dotted the landscape and sheep grazed in clumps.

Ngaire stood at the door now, a large smile on her deep olive face. Her nut brown hair, streaked with gray, hung in a braid.

“Did this little rascal wake you?”

At Ngaire’s side, the little rascal’s face was lit up with pride at her accomplishment.

“Well … yes. But it’s a good thing. The sooner I start operating on New Zealand time, the better.”

“I’ll brew some fresh tea for you in the kitchen. Chamomile, right? I bought some especially.”

I smiled. After a few weeks of being on Grammie’s adventure, it didn’t surprise me anymore that she had seen to all these little details.

Fumbling for my watch on the bedside table, my fingers instead wrapped around the tiny wooden whale that had been in envelope seven. I traced its smooth shape before putting it down next to the photo of the tree with the spiky red blossoms, the other mystery item in the envelope.

“All to be explained, right Grammie?” I said aloud to an empty room. Ngaire and her great-granddaughter had already left.

I made my way—somewhat groggily—to the sagging bay window and pressed my face up to the glass to stare out at the ocean. Blue, navy, and turquoise layered the water, and waves washed against rocky cliffs and a fringe of dark sand. How many times had Grammie looked at this same view? Ngaire had told me the night before that Grammie had slept in this room many times in the year she spent as a missionary in New Plymouth. The thought filled me with a strangely conflicting mix of joy and sorrow.

As I dressed, I thought of the warm welcome I had experienced from the moment I had arrived at this home. My first feeling as I drove up the long sandy driveway had been one of trepidation. The weatherboard home, spreading in all directions, looked rather haphazard. Additions had been made over the years and nothing quite matched. I couldn’t help but wonder who could live here.

However, Ngaire’s warm welcome at the door had eased my apprehension. She had folded me into her arms like a long last daughter and drawn me into her worn, but spotless home where the aroma of home baking wafted from the kitchen. I had been introduced to her large extended family. Her son and daughter-in-law, with their five teenage children, all lived in the house. One of her granddaughter’s had ‘got herself into a spot of trouble’ as Ngaire put it, with the result that a lively two-year-old now also shared the home. “It’s crowded but whānau – extended family – is important to us Maori,” Ngaire had told me with a smile.

The evening had passed quickly, a blur of smiling brown faces and hospitality. I loved the way they spoke, the lilting accent that ended every sentence on an upbeat. I suspected it was on purpose that Ngaire delegated me as babysitter for her granddaughter’s little girl, Aroha. “We’ll cook while you watch the little one,” she said, depositing the child in my arms. “She’s tired so just cradle her, and she’ll probably go to sleep.”

I admit I hadn’t been all too happy to begin with. I knew nothing about babies and small children, and they scared me somewhat. I had leaned back in the armchair, shifting position until Aroha seemed comfortable.

“I like you,” she had said, reaching up and touching my auburn curls. “Your hair is pretty.” She entwined her fingers in a spiral and held it firmly until her eyes drooped and breathing slowed. Then her grip loosened and her hand fell onto my chest, splayed like a tiny starfish.

As I brushed the hair that little hand had clasped the night before, a new—unwanted—thought drifted through my mind. Lauren’s little one would be just a little older than Aroha. What kind of conversations would she and Lauren be having? Did she look like us, or more like Steve? The sudden yearning to see my sister’s child was intense, but I pushed it away as I made my way to the kitchen for my cup of chamomile tea.

“You ready to go girl?” Ngaire asked when the tea was finished.

“Take a jersey with you. The early morning breezes are fresh on the beach.”

We slipped out of the house and Ngaire led the way to a sandy path. “I often go down to the beach in the morning to pray,” she told me.


Grace takes delivery of a package and her life is turned upside down by nine sealed mystery envelopes from her late grandmother. Grammie’s instructions require Grace to take the journey of her lifetime, not only to far off places, but also into the deepest parts of her heart. As she follows the trail laid out for her and uncovers her family’s darkest secrets, Grace is forced to confront the loss and betrayal that has scarred her past and seek the greatest Christmas Treasure of all. 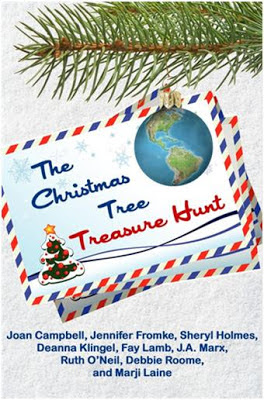 Chapter One by Joan Campbell

Learn more about this fun project at Write Integrity Press.