Life Lessons and How I Delayed 130 Passengers 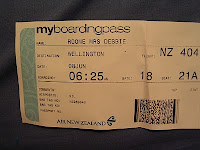 “I don’t think you should go to Wellington,” said Kevin. “You’ve had a bad dose of flu and you don’t look well.”

I disagreed pointing out that I had work appointments that had a deadline of Wednesday 9th June. So on the 8th June at 5:30 am – on an empty stomach - I swallowed two flu capsules and a spoon of cough syrup and set off for the airport. By 6:30am I was seated in the aircraft and started feeling hot and dizzy. I stripped off some layers, then shoved my sleeves up and turned my air vent on full. By now, the cabin crew had finished the safety demonstration and we about to head onto the runway. My vision was blurring and I knew I was going to faint. There was no space to put my head down and I could imagine the drama if I slumped over during takeoff.

I pressed the call bell.

Friends and family will know that I do not like being the centre of attention and had to be desperate to do this. The cabin crew asked the passengers next to me to move to other seats and through the blur, I remember they shot off like I had the plague. The next step was wet cloths on my neck as I was burning up and sweating. Then an oxygen mask over my face and the reassurance that the paramedics were on the way.

Still hazy and dizzy, I answered the medics’ questions as they helped me into a wheelchair along with my oxygen. Unfortunately I was seated at the back of the aircraft so all the passengers had the privilege of watching my exit. Two thoughts were running through my befuddled mind: please don’t let there be anyone I know on this flight and Kevin is going to be so cross.

As soon as we got off, the 0°C air in the air-bridge hit me and I felt the first sense of relief. However, the story was far from over. I was pushed through the airport to the first aid room which was a fair distance – and every time I peeped, people were gawking at me. Then I discovered they had called an ambulance.

I was so embarrassed.

Both sets of medics checked me over, measuring my oxygen levels and heart rate and finally I was given the all clear. They advised me to go home and rest – but being a woman with a mission I said no, I needed to get to Wellington and no, they must NOT call my husband. So light-headed and on shaky legs I followed the Air New Zealand staff member to rebook my flight.

I must give Air New Zealand a thumbs up here. All the staff who helped me were wo 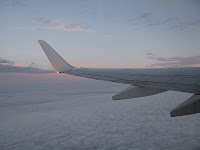 nderful – very compassionate and caring – and no worries that I’d delayed the flight and all the passengers. I’d only paid $1 for my trip but in spite of that they rebooked me for a late morning flight and later put me on standby so I could leave a little earlier. I spent three hours in the airport, eating, drinking and resting to try and get my system back to normal.

Anyway, after all the embarrassment, humiliation and mortification, I believe I have learnt some valuable life lessons:

1) Sometimes husbands do know best – and yes, Kevin was a little cross with me.
2) Don’t take medication on an empty stomach at 5:30am. It will make you feel woozy and faint.
3) There are some wonderful caring people in this world who will help you when you need them.
4) Flying with earache is not a good idea. It can be very painful.
5) Your offspring will laugh at your medical dramas once they know you’re not dying.