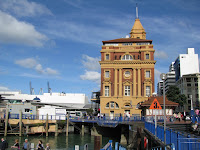 I was promoted to a featured travel contributor for Associated Content this week and my first assignment was to write an account of a funny travel experience. Straight away I thought of a train trip Kevin and I took years ago. We were leaving from Johannesburg and by the time we got to the station, the train was already moving. I felt quite smug as I wrote the story, thinking, I’ve got travel down to a fine art now. I’ll never end up in such a situation again.
They say pride comes before a fall.

Two days later I was on an early morning flight to Auckland. I was running slightly later than I would have liked and then discovered Kirstin had parked us in ... and we couldn’t find her keys ... and neither could she. After several minutes of panic, they were finally found in her bedroom. So we jumped in the car and set off only to discover that what we thought was condensation on the window was actually a thick layer of ice. At the end of the road, Kevin stopped. “Give me a plastic card so I can scrape this off.” he said. “The window washer’s not helping and I can’t see a thing.”

We finally got to the airport and by the time I reached self-check-in, it was 15 minutes before departure time. The machine declined my request so I rushed to the Air New Zealand counter ... and thankfully they gave me my boarding pass. I was even more grateful when I boarded the plane (last) and passed about seven businessmen on standby. 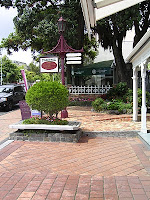 Unfortunately, that’s not the end of the story. Once I was buckled in, I reached into my bag to switch my cell phone off ... and discovered my purse was missing. I took it out to give Kevin a card to clean the window, I thought. I must have dropped it in the car! I went cold as I realised I couldn’t do a thing without it in Auckland. All my cash was in it, my bank cards and identification. I phoned my dear, longsuffering husband and begged him to rush back to the airport with it, although it was only a couple of minutes before takeoff.

He obviously couldn’t make it in time and I spent the next 80 minutes stressing about what I was going to do. I called him on arrival and he told me it was being couriered up on the next flight.

“You don’t want to know.” he replied. 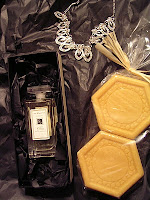 d safely two hours after I did and in spite of the drama, I had a great day in Auckland. The weather was perfect, I met some wonderful people and managed to get most of my work done. I also enjoyed a lunch at an Italian restaurant and dinner at a coffee shop, received some free soap, expensive body oil, skincare and perfume samples, some strings for my bass guitar and a gorgeous necklace - plus I was given a really nice hand massage.

Looking back, it is something to laugh at but I’ve learned my lesson. I fly to Wellington on Friday and you’d better believe that my suitcase will be packed on Thursday and my purse will be safely inside my bag!
Posted by Debbie Roome at 12:32 PM